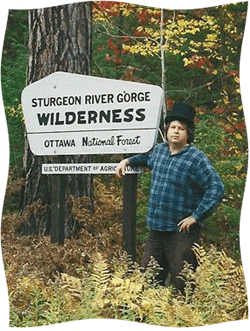 My earliest intrigue with poetry and literature in general came from my mother's reading from the Childcraft books she had bought for my arrival into this world. Walter de la Mare's verse had an effect on me, but so did poems as varied as Alfred Noyes' 'The Highwayman,' James Whitcomb Riley's 'When the Frost is on the Punkin' and 'The Raggedy Man.' Stories from Greek, Roman and Norse mythology also held much for my imagination, as did historical material. Readings on my own some years later (age 8-10) awakened the first remembered darings to write myself. Among those inspirations were C. S. Lewis' The Lion, The Witch and the Wardrobe, which revealed to me the painful, yearning attachment I would later experience even more intensely. But it was my encounter with the short stories and verse of Poe that triggered the determination to write that would mark my adolescence and establish much of my psycho-aesthetic foundation.

Around the end of 1969, I began reading free verse, including that of Carl Sandburg, whose spare utterance helped me to overcome dependence upon the mellifluence of 19th century prosody. This liberation was a necessary precedent of the discovery that would come about a year later when I came upon Dylan Thomas' 'Fern Hill' in a school textbook. For all my love of the imaginative and intellectually provocative, I had never met anything so telling of the richness of place and memory, of the sparking power of free-wheeling associations, of the dream-freedom made so portable by words! In a moment, I came to understand that the lyrical workings of my interior were potentially articulate, that the nuance-laden actuality of what had seemed destined to secrecy could be the magically undiluted heart of writing! My poetic pursuits ever since have unfolded from that revelation.

In addition to reading all I could find of Thomas' work, I found my way to translations of later 19th and early-to-mid 20th century French poetry. Pierre Reverdy impacted me in ways yet detectable, as did Surrealist poets such as Andre Breton and Robert Desnos. The tenets of Surrealism remain useful to me, and the sparkling, liberating rush imparted by much early Surrealist expression has never left me.

In my practice, poetry has been the most authentic of vehicles for clarifying and extemporizing self-knowledge as well as the freest, wildest means of cognitive transport. Through poetry, my faith in dreaming and the dreamlike within diurnal living finds its inexhaustible home.