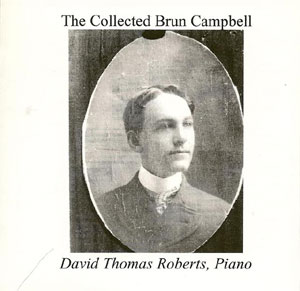 Sanford Brunson Campbell was born March 20, 1884 in Oberlin, Kansas. A natural interest in music led to piano lessons by age 10. Around 1898 he ran away from home to Oklahoma City where he played at a local music store (Armstrong-Byrd Music Co.) and chanced to meet Otis Saunders, an associate of Scott Joplin who asked him to play through the manuscript of Maple Leaf Rag. Quite taken with the piece, Brun tracked down Joplin in Sedalia, Missouri and later followed him to St. Louis. Campbell became an itinerant ragtime pianist traveling through the Midwest and South, playing the honky-tonks, barrelhouses, pool halls, steamboats, etc. He retired from music in 1908 when he married and became a barber in Venice, California. During the West Coast revival of traditional jazz in the 1940s Brun was rediscovered, made recordings and wrote many articles on the old days for various jazz magazines of the period. He died November 23, 1952.

None of the Midwestern ragtime pioneer pianists were ever recorded in the early period of the art. We can only try to imagine what Tom Turpin and Louis Chauvin really sounded like, gleaning clues from their tunes. By the time a major ragtimer recorded, it was Mike Bernard, the East Coast dazzler who regularly won ragtime contests. His technique was formidable, but he sounds rather wooden on the old Columbia 78s. Brun Campbell, however, came out of the Midwestern folk ragtime world of the pioneers and his sound is much more infectious and moving. His is a hot, rhythmic foot-stomping style. What you would have heard in the Sedalia and St. Louis sporting districts in the 1890s. He is our one precious link to the beginnings of the Midwestern art of ragtime piano playing.

His recordings were collected by Paul Affeldt and issued on his Euphonic label, making them available to the ragtime community which influenced a number of composer pianists including myself, Tom Shea, Jack Rummel and Richard Egan who, along with Campbell player Barry Morgan, painstakingly transcribed Campbell's playing and made it available in a folio available from:

Finally, Brun's solos have informed the compositions of David Thomas Roberts who has recorded them for us here faithfully with the robust down-home Brun Campbell spirit.

This is a studio recording in which a small vertical piano was used in order to replicate the sound and flavor of Brun' s original recordings.

More recollection-filled pastiches than formal compositions, Brun Campbell pieces are filled with all the idiosyncrasies expected of folk music. From the metric oddities of Barber Shop Rag and Campbell Cakewalk to the major-minor clash imposed upon Scott Joplin's Maple Leaf Rag, Brun's world is more akin to that of early country musicians such as Jimmie Rodgers and the Carter Family than that of classic ragtime pioneers. Also similar to "authentic" folk music is Campbell's penchant for re-cycling material. Ginger Snap is partly a recasting of F. X. McFadden's Rags to Burn while Reminiscences and Rendezvous Rag include an incarnation of the final strain of Joplin's Original Rags.

While some Campbell performances seem entirely informal (Fragment, Tent Show Rag), others represent pieces with well-evolved identities (Chestnut Street in the 90's, Essay in Ragtime). I chose to open and close this project with Essay not only because Brun's multiple recordings invite it but because of its relative formality and sheer countrified beauty. I also relished the opportunity to close the recording by bringing back the touching C section, departing from Brun's version.

What can one say of such a unique little entity as Grandpa's Stomp? Also frozen in their peculiar worlds are Slow and Easy and the lovely Blue Rag. Slow and Easy fascinates with its guitar-like licks and hints of what would become rock 'n' roll. My approach to performing Brun Campbell falls between duplication of the recordings and personalized stylization. It could be said that I have generally played what Brun might have played on another day but with varying portions of my own embellishments, voicings and rhythmic departures always included. It is in the more primitive pieces that I've remained closest to the originals. And where eccentricities have been most extreme (i.e., the bass line of the trio of the longer versions of Salome Slow Drag), I've tended to reproduce or at least approximate them. All metric surprises have been honored. Brun's tendency toward acceleration has been preserved in most examples. In all cases I have attempted to capture the driving, lilting musical spirit of Brun Campbell in all of its moving intangibility.

Note: The signature Campbell stomping effect was mustered by miking a makeshift assembly of cardboard and wood I was stomping. For some tracks the microphone was adjusted to yield a more powerful, thudding effect, such as in Rendezvous Rag.