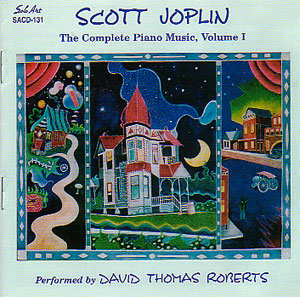 The work of ragtime pioneer Scott Joplin (1868-1917) is unique in American culture and remains inadequately understood. Though Joplin’s music underwent an enlightened reassessment in the late 1960s and first half of the ‘70s which brought classic ragtime to a new classical audience, the transformation of academic and general perception of this music remains incomplete. The seriousness and rarified eloquence of Joplin’s oeuvre may continue to elude some observers whose sheer bias against ragtime and/or non-comprehension of late nineteenth century American sensibilities is intractable. But for those whose appreciation of the popular and romantic roots of turn-of-the-century American culture runs deeper, Joplin’s eclectic and highly individual accomplishment is extraordinarily insightful and timelessly precious. He is both akin to American predecessors such as Louis Moreau Gottschalk and Stephen Foster and such European romantics as Frederic Chopin and Robert Schumann. He shares musical territory with contemporaries as dissimilar as John Phillip Sousa and the Brazilian tango pioneer, Ernesto Nazareth. In Scott Joplin’s hands, the syncopated, miniature piano form purveyed in brothels and drawing from quadrilles, schottisches, marches, polkas, habaneras, salon music of all types, banjo tunes, folk songs, minstrelsy and the rhythmic influence of West Africa became a crystalline vehicle for profound self expression.

Though the most basic facts of Joplin’s life are well known, letters, autobiographical documents and intimate anecdotes have not been forthcoming. Born into a musical family in Bowie County, Texas on November 24th, 1868, he became interested in the piano early on, studied with a local German music teacher, and left home in his teens to begin an itinerant life playing in saloons, tent shows and brothels around the Midwest and South. He lived in Sedalia, Missouri during much of the 1890s where he eventually encountered John Stark, who, in 1899 published Maple Leaf Rag, the success of which enabled the composer to leave the deleterious tenderloin performer’s life and settle into teaching and composing in St. Louis. His first opera, A Guest Of Honor, has never surfaced despite claims and rumors to the contrary. A second opera, Treemonisha, composed simultaneously with his later piano pieces, became his single greatest hope for full acceptance as a serious composer. Its doomed first performance in New York in 1915 coincided with his health’s decline due to syphilis, and on April 1st, 1917, he died, as Scott Kirby has written, “in obscurity, madness and despair.” Joplin’s early champion, John Stark, observed his passing most hauntingly: “Here is the genius whose spirit, though diluted, was filtered through thousands of cheap songs and vain imitations.”