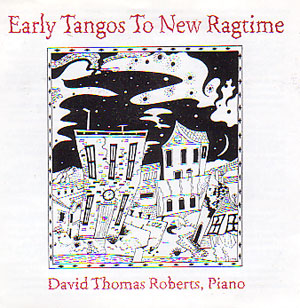 The vitality of contemporary ragtime-based composition could not have been foreseen during the ragtime revival of the 1970s when many of today's composers took up the form. By the late 1980s, however, some of us observed the makings of a wave as fresh and crucial musical links formed between composers who (1) saw Latin American music as a fomenter of ragtime composition's future as well as its past and (2) dared to believe that some of the most important music of the later 20th century was and would continue to be "New Ragtime."

The term "New Ragtime" made its first appearance as a possible battlecry in George Willick's article, "Brun's Boys" (The Rag Times, November 1980). Appearing in all caps and referring to my work, it seemed more an affirmation of my output in the late 1970s then a moniker for a movement. But with the explosion of ragtime composition since 1980 -- a period marking the emergence of the likes of Frank French, Hal Isbitz, Glenn Jenks, Jack Rummel, Scott Kirby and Brian Keenan -- "New Ragtime" has found its undeniable application. A new era in the development of ragtime and ragtime-based composition is here.